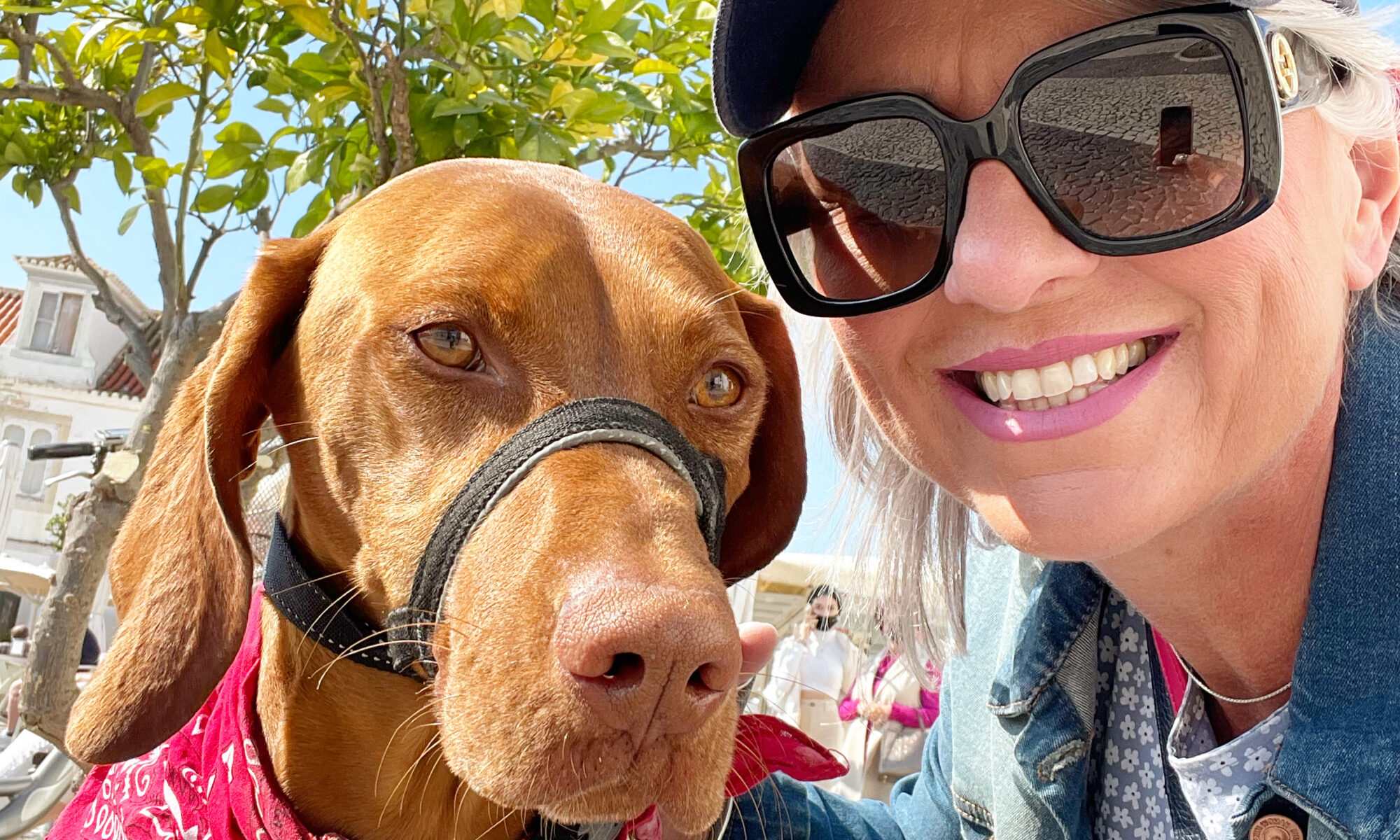 We were undecided whether we should head over to Spain for the afternoon, or to the last Portuguese town before the border – Vila Real de Santo António. We were almost at the border when we realised that my passport wasn’t in the car, so decided it was probably safer to stay this side of the river and take a stroll around the town and check out the most easterly beach in Algarve.

Shaun always sees things I don’t, or maybe he points things out to me and I don’t bother doing the same for him..? He noticed a beautiful mosaic above a shop which I would certainly have missed. Maybe it’s because I’m short, or maybe it’s because I’m so focused on keeping the dogs walking to heel that I don’t spot some of the more interesting stuff higher up.

I really enjoy turning my photos into digital art. I’ve sold some of my work to local restaurants and hotels, and now I’m working on a few commissions of private houses. If you would like me to create an original piece for your home – or of your home, drop me a line hello@fiftysister.com

Everyone in their Sunday best, or were they?

One of the first things we noticed was how well dressed everyone appeared in Vila Real de Santo António, maybe they had been to church? On hearing them chatting we realised that most of the visitors there were Spanish. I don’t want to be derogatory about Portuguese people, because they really are the most welcoming, friendly easy going people I’ve ever met, but their dress code is super casual. The Spanish on the other hand, are seen wearing designer sunglasses, expensive shoes, crisp white pressed shirts and all round less casual clothing. I’m not the first person to notice this, as a few of my friends have said exactly the same thing. On the streets of most Algarvian towns and villages, practical clothing is the number one choice, and there’s nothing wrong with that at all.

Take a stroll along the river on the Avenida da República

We started by taking a stroll along Avenida da República. The city front facing the Guadiana river. It’s a really beautiful part of Vila Real de Santo António (VRSA) and where some very fine architecture like the Grande Hotel Guadiana is located. Vila Real de Santo António’s harbour is along the riverside, where you can embark for river cruises, the short ferry ride to Spain and boat trips to the Atlantic beaches. Follow the calçada payment south to the mouth of the river and  border with Spain. Shaun and I wondered how difficult it would be to swim the border as it’s not that far. Depending on the tide, we think it would be an easy 10 minute crossing.

There are lots of restaurants selling fresh fish stews, cafés with a huge selection of cakes and snacks and a good variety of shops. We strolled to the end of the walkway, where the surroundings became a bit questionable, with people living in shacks made from old boat parts and women selling very preloved clothing from an old well worn, weather beaten leather sofa. Now I am sure I’ve just put you off visiting this place, but it really was a small part of the town, filled with old boats and crumbling buildings.

Opposite the harbour on Avenida da República is Praça do Marquês de Pombal. A beautiful perfect town square or praça which was designed to be the commercial and civic centre of the city. Lots of market stalls to choose from selling everything you can think of. Wander in every direction and you will find cafes, bars and small restaurants filled with locals and visitors. 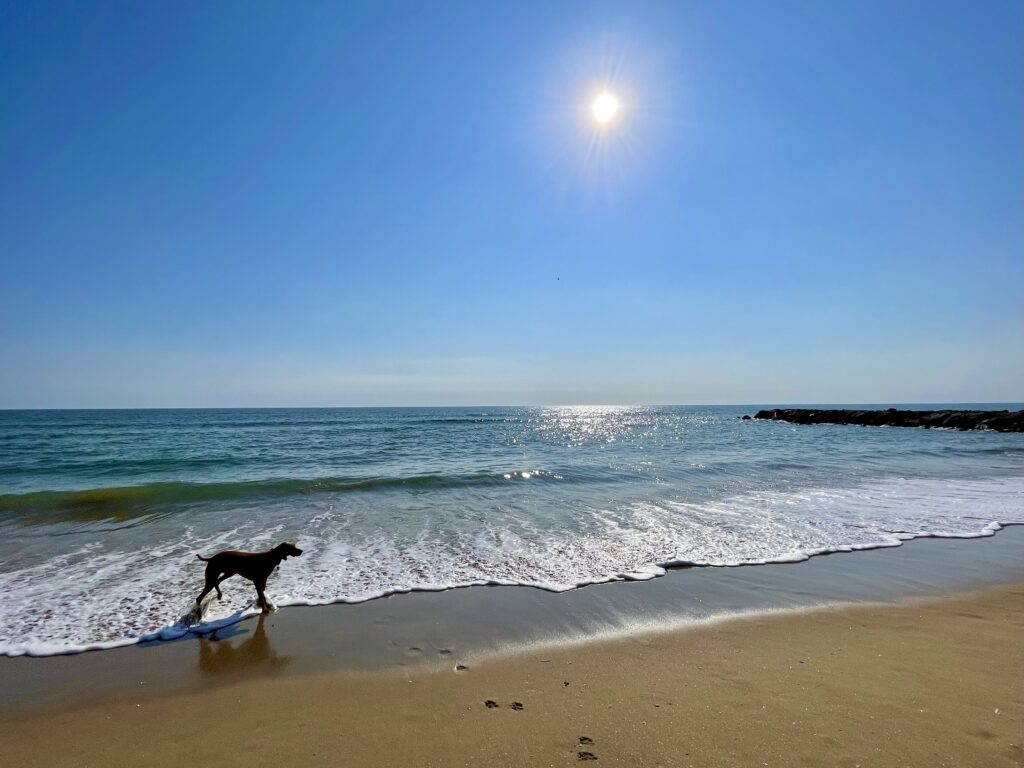 We headed to the last beach of eastern Algarve which is Praia da Ponta da Areia,  where the Guadiana meets the Atlantic. Drive via Farolinho de Vila Real de Santo António. Take a right halfway down the road and follow the signs to Caramelo Beach Club. There’s plenty of parking spaces and boardwalks straight to the beach. You can also access the beach via Caminho dos Três Pauzinhos which is a 15-minute hike through a beautiful pine forest – Mata Nacional das Dunas de Vila Real de Santo António. Keep an eye out for chameleons, which come down from the trees to lay their eggs in the sandy soil. Everything is closed in the winter, so make sure you take a drink with you as it’s a reasonably long walk to the cafes in Monte Gordo further west on the beach. 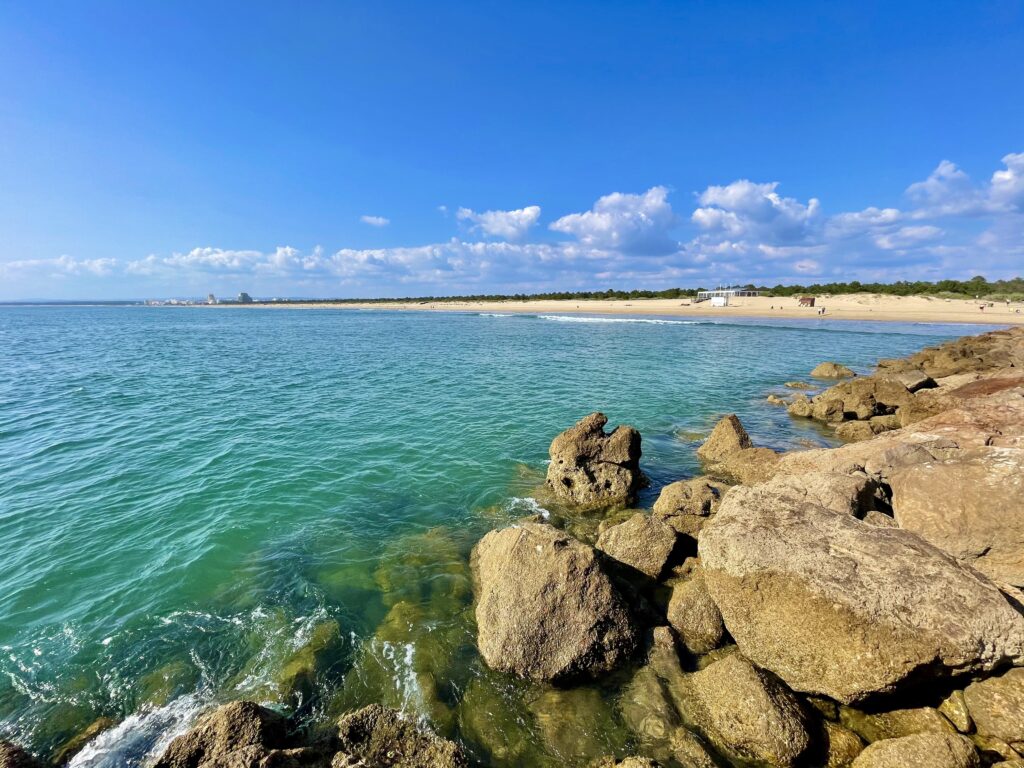 We were having a super afternoon, relaxing whilst watching the huge swell hit the rocky breakwater when…… Bird ran off to take a poop on the beach. Shaun was doing his best to keep his eye on the prize, geomapping the poop’s location by scanning the beach for rocks and other memorable landmarks, when eek! He slipped between two boulders and ripped his big toe in half (maybe not quite that bad but he was stunned and a bit traumatised by all the blood) and scraped lots of skin off his shin. I made my way there as quickly and carefully as possible but he had lost the ability to speak. Realising conversation was the last thing on his mind, I made a dash to scoop the poop and wait it out on the beach until he had recovered from his tumble.

He hobbled back to the car and we drove home in silence. If there’s one thing I’ve learned after being married for almost 35 years, it’s when to shut the hell up. After putting his chair in the late afternoon sun and applying a bottle of beer to his mouth, he slowly regained the ability to speak and asked what was for supper. He won’t be playing tennis for a week or so, but a bit of daily first aid should fix him up until his nail grows back and his skin heals.

It cut our afternoon short so we will be back again soon with more info on this area and no doubt some more photos. Check back soon for new posts or subscribe to my mailing list by clicking here. I will send out an email once a month to keep you up to date.

Have a beautiful week!